‘When you have this portfolio you don’t need anything else.’

‘When you have this portfolio you don’t need anything else.’

A 350% increase in first quarter turnover and a bulging forward order book have laid the foundations for a record-breaking year at Wacker Neuson dealer LCF Engineering.

Add to the mix a host of new customers won over from competitors and a series of top-secret promotions planned for the year ahead and it’s no surprise the East Kilbride-based business has become ‘one to watch’ in Scotland’s plant industry.

The icing on the cake came when Wacker Neuson declared LCF its UK Dealer of the Year 2020 for both light equipment sales and spare parts support.

That huge uplift in turnover over the same three months in 2020 was all the more remarkable given that it was achieved against a background of Covid restrictions and the corresponding downturn in construction activity as well as the upheaval of a move to new premises in East Kilbride.

Sales and operations manager John Young believes the German/Austrian manufacturer’s wide range of equipment has been a big advantage, as has the ‘super-deduction’ tax break allowing businesses to claim back 130% of investment in equipment against taxable profits.

“Business was steady throughout the pandemic but has really taken off since the turn of the year,” he said. “As soon as we get a delivery it’s getting a PDI and straight back out the door to customers. 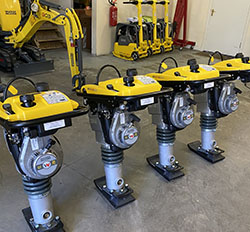 “There’s a real ‘feel good factor’ around and we’re selling across the range. Cabbed dumpers are selling very well as are the mini excavators. Around two thirds of recent customers have been won from competitors, some of which are struggling with long lead times whereas if we don’t have something in the yard, we know we can get it quickly. In addition, we’re getting good orders via word of mouth.”

With a line-up that includes everything from compaction plates to excavators and cabbed dumpers, LCF has no ambitions to become a multi-franchise operation. “We don’t need anything else when we have a portfolio as wide as Wacker Neuson’s,” said Young.

That claim is borne out by a raft of recent deals: West Lothian’s Mulholland Plant Services has increased its fleet of cabbed dumpers, Eagle Plant and Advance Construction in Glasgow and Your Equipment Solutions in Falkirk have all taken a selection of light equipment. McLeod Self Drive Excavators of Beith has bought 2.6-tonne and micro excavators and 3-tonne swivel and tracked dumpers while fellow East Kilbride company Garden Maintenance invested in a package of an 803 excavator with breaker and a tracked dumper.

Elsewhere, a black-painted 803 micro excavator, brought in for demonstration purposes, didn’t last long; it was gone within a week to Gordon G Middleton Builders in West Kilbride, marking the first sale in Scotland of the special edition model. 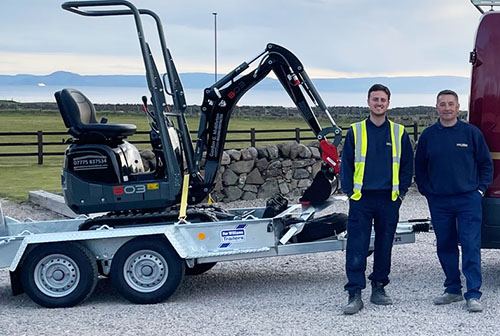 Filling in the gaps have been multiple deals for equipment such as road saws, trench rammers, rollers etc.

Young was recruited last year by Fraser Ross who formed LCF in 2017 to service and repair small construction kit. It quickly became the Greater Glasgow dealer for Wacker Neuson’s light equipment and a year later was appointed to handle the full range.

Watch the walk-round video of the Little Black Number with AC/DC soundtrack.